The 2nd European Games Minsk 2019 will give a new impulse to the development of sport movement in Belarus, BelTA learned from Chairman of the Belarusian Tennis Federation Sergei Teterin. He enjoyed the honor of beginning the Flame of Peace relay race in the agrotown of Aleksandria, Shklov District, Mogilev Oblast on 31 May.

Six torch bearers took the Flame of Peace to places of interest in the agrotown. They started with the local community center, went on to a sport complex, the school Belarus President Aleksandr Lukashenko used to go to, and the local paper mill Spartak. 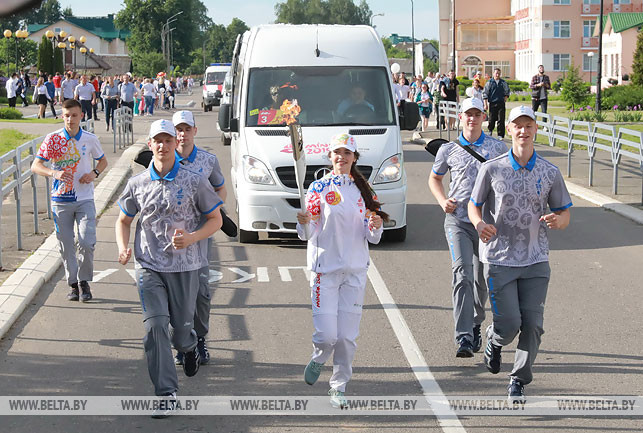 Sergei Teterin described the 2nd European Games Minsk 2019 as a purely positive thing for sport and the country. He compared this European movement to the Olympic one. “I think that for every citizen and athlete, who has had the honor to get in touch with it or, more than that, carry the Flame of Peace, it will become one of the most unforgettable moments in their lives. It is as great as winning a prestigious tournament,” he said.

The torch bearers also went to Trofimov’s Wellspring where in the shade of trees they could have some rest, take in the surrounding landscape, and quench their thirst with water from the famous wellspring. 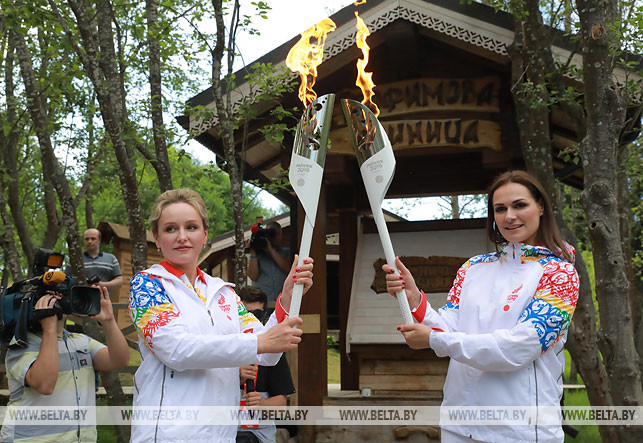 Miss Belarus 2018 and a star ambassador of the 2nd European Games Maria Vasilevich said: “It is a great responsibility for me to participate in the torch relay. Yet I am very pleased to be part of this large-scale event since I am convinced it will become a magnificent festivity for our country.”

The star ambassador recalled the European figure-skating championship and the ice hockey world championship Belarus had hosted. “I still have vivid recollections of those events in the capital city. I am convinced that the European Games will bring even more positive emotions, will help the world discover our beautiful country from a new angle,” Maria Vasilevich. She admitted she loves track and field athletics and will keep an eye on progress of the competitions in this kind of sport with pleasure. She also intends to attend all the key competitions in the Dinamo Stadium.

Gorki is the next town the torch bearers are supposed to visit. In Gorki the Flame of Peace will be taken to the cultural and entertainment center Amphitheater, the botanical garden of the Belarusian State Agricultural Academy, and the central square where a thematic flash mob will be arranged. The torch relay will visit Golubaya Krinitsa (Blue Spring) in Slavgorod District, a well-known natural landmark, the war memorial Ludchitskaya Vysota in Bykhov and the Chigirinskoye water reservoir. Bobruisk and the district are the final destination for the torch relay in Mogilev Oblast. The symbol of the 2nd European Games will spend two days in that area. On 3 June, the flame will be carried through the central streets of the city to Bobruisk Arena. On 4 June, the torchbearers will carry the flame to OAO Krasny Pischevik, Belshina and the agricultural enterprise Gigant in the agrotown of Bolshiye Bortniki.

The torch relay has already been to Brest Oblast, Grodno Oblast, and Vitebsk Oblast. After the flame leaves Mogilev Oblast it will head for Gomel Oblast.